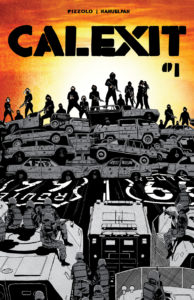 A comic book about the deadly serious matter of secession? Who’d a thunk it? But it’s happening.

Black Mask Studios announced this week that it will debut CALEXIT in July.

And maybe it’s not so surprising. The real-life Calexit is probably the most vital and viable secession movement in the country today. According to a Reuters poll taken in late January 2017, right after Trump’s inauguration, fully a third of Californians support seceding from the union. That’s a pretty remarkable number, stark evidence of just how deeply divided our country is.

In the series — written by Matteo Pizzolo and illustrated by Amancay Nahuelpan — California leaves the union rather than be ruled by a tyrannical president.

Early in the story, the president orders the deportation of all immigrants. In response California declares itself a sanctuary state. Rebellion ensues. In an attempt to regain control, the president declares martial law. Things escalate from there.

While comic books are pure entertainment, Pizzoli has another goal: “We’re looking to spark a dialogue with fans, press and retailers about what’s happening, both in the real world and in the fictional world of CALEXIT.” Indeed the launch tour is titled “CALEXIT: Comics Change The World Tour”. In addition, each issue of CALEXIT will include real-world info on grassroots organizing for 2018 elections.

If you find all of this as fascinating and troubling and adrenaline-inducing as I do, check out The Separatists.  In my third Erica Sparks action-thriller I take this premise to its limits. I had a blast writing the book, and I hope you have as many thrills reading it.

Now, who wants to come with me to Comic-Con?